Remember, remember!
The fifteenth of September,
The commit we know a lot;
I know of no reason
Why four-one-two revision
Should ever be forgot!
HELLO WORLD!
As some of the FOnline fans around here have already been aware, the Rotators team started working on one of the older SDK versions, with aim to improve and stabilize it for long-running servers.

According to our own experience, and those of other developers, drastic engine changes - being often more than required and also great in terms of features - have been added too quickly in the past. This left long-running servers lagging behind, unable to adapt and update, and up to this day stuck in the middle of nowhere. In most cases, the line has been drawn at revision 412 and there's hardly a FOnline server developer left for whom this version doesn't ring a bell.

This version is the starting point for our project, currently known as FOClassic.


This is for the second time that Rotators attempt to improve FOnline by introducing their own changes.

For the record, the first attempt at this was our FOnline: 2238 server, which was originally based on FOnline: The Life After content.
It didn't end quite as planned, but it was still an achievement that paved the way for other developers, allowing them to create or improve their vision of the Fallout universe - or at least a part of it.

Today, instead of forcing our own vision of that universe, we - Rotators - want to continue helping the server developers by providing them with tools, rather than a product.
Comparing the current situation to the times when we were working on FOnline: 2238, now we have much more freedom in regard to introducing engine changes. Our aim is to revive some old, dusty features and engine parts and also to eliminate certain problems and limitations that have been hindering the implementation of various new, fresh features on FOnline servers out there.

Let's hope that our third attempt at revolutionizing the engine will be based on equal rights among all developers, allowing all of us to improve it as we see fit.


Obviously, the decision about migration from FOnline to FOClassic, and how that process should look like, is completely up to server developers, but we'd like to say a few words before you start. If you're an active player thinking about posting suggestion on your favorite server(s) forum, you should read this as well.


MIGRATION CHECKLIST
Here's a quick list of things which should be done for a (hopefully) flawless migration.


"OK, done. Now what?"
First of all, we'd like to see servers extensions cleaned up. Any changes made to FOnline.h should be either ported to FOclassic.h or added to scripts.
In most cases extensions are needed only to extract/modify raw values from non-public part of a given object. While the implementation itself is often located within extension, it could be as well done in scripts, if they had access to it - and not all servers are aware of the possibilities provided by asIScriptEngine.

We'll try to sort it out, following the philosophy that if there is a single one server that needs it, the others might benefit from it as well.
Which means that we're going ask servers for their extensions code - either fully or parts required. If you decide to send it to FOClassic team, be completely aware we might archive it in public repository, making it available for anyone.

This rule exists for a few reasons:

During migration process we're not planning to change objects structure. If server-specific feature requires member(s) "hidden" deep inside non-public part of an object (CritterCl::strTextOnHead, Item::Alpha, etc.), we'd rather make a proper script function, than do it in an extensions header. Once the migration is complete, the code can be re-added to FOClassic.h, if there's still need for that.

There's still a few places which has mixed content, meaning some resources come from http and thus will generate warnings in the browser. I'll try to fix those instances where possible.

If you see something that's broken because of this, please give us a notice.

I know there's sadly not much going on here and the last update was almost a year ago, time really flies, but I'll point out some recent changes and news anyway.
I've personally been very busy with work and stuff (excuses, I know!) so I haven't had time to do some much needed maintenance of the status page, until now.

I'm also thinking of updating the Play FOnline launcher, to make it possible to download, install and play all the current servers. Would also appreciate any feedback about it, if you are using it or have used it in the past.

Ok, let's cut to the chase, here's some updates:

The status page has been updated with the following things:
- Added Battlegrounds.
- Modified the entry for FOnline Forever to new host and marked it as open. Make sure you check it out!
- Marked Teleport and Goon Haven as closed. If this is not correct and they have changed IP/port, I'd like to know.

If you have more suggestions for the status page, please reach out to me or reply to this thread and I'll make sure to add/correct stuff.

FOnline Forever
Forever was started by Ravenis and in his own words it started as a basic modification of the released 2238 sources, almost 3 years ago:

Yes, I know there is couple very advanced mods based on 2238 source, but I decided to start making not so modified mod.
Since you all need to admit ol' good 2238 was fun until it lasted.

So I'm starting new server. It's basicly default FO 2238 at the beginning.
Some minor changes are done already, and future plans includes example these things:

-Craftable skill implants, example head implant that rises your Small Guns skill by 10%. (implants have "tier" levels, so tier 1 is +10% and tier 2 is 20% and so on...)
-More craftable items with some special features. (About these items we can talk at the IRC channel)
-More missions/quests. (Always nice to have more solo material too)

I'm sure there's been a lot of progress since then, I haven't personally tried it but if you've missed it I suggest you check it out!
It received a large updated just a week ago.


FOnline: After Times
FOnline: After Times is a new game based on the reloaded sources. They are still working hard on finalizing the game and making it ready for prime time.
Accordingly to their website, they will be releasing on 25th of march, so make sure you don't miss the date!

We are bringing to you the new FOnline game based on the 2nd season of FOnline: Reloaded source. But don't expect there the same game. It will come with some new features, fixes and adjustments.
We will start without previous closed or open tests.
More info here: http://fonline-aftertimes.net/

Got any projects you want highlighted? Visit the FOnline projects board and give us an update.

It is thee wipe-tyme upon us once more. This time, the server apocalypse is carving for NoNameYetTeam's FOnline - Ashes of Phoenix. Many changes were done over the past one and a half year, so if you feel the mood, download the latest client and dive into the trouble. You might as well meet one or two of them old Rotators. Or maybe not. It's classified.

If you are not yet in the mood, you might want to get ready with watching some of the gems posted over here in our forum.

Also, here is a trailer to fill up this news post: 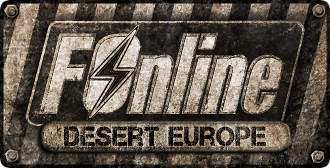 After a long, long silence from the Desert Europe team, today the project has become open for anyone interested. Unlike the previous release, this one is an open repository containing all changes done by developers in past.

For people who don't exactly know what FODE is, or want to refresh their memory, take a look at the announcement thread here on FOdev.